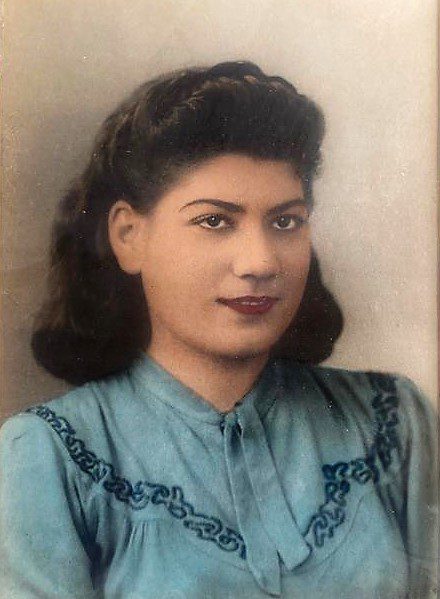 Victoria Shachmorov, daughter of Yocheved and Epharim Mizrahi, was born in Haifa on March 4th, 1921. Her father, Ephraim, was a prominent resident of the city, taking an active part in the Nili underground mainly in Zichron Ya’acov. Vicky is the eldest of Yocheved and Efraim’s nine children. 16-year-old Victoria studied and ran a falafel stand at 22 Hahalutz St. in Haifa. She initially joined the Hagana and participated in secret meetings. In 1941, she was recruited to the Lehi by Leah Prisant “Ariella”, who also served as Victoria’s handler. She underwent ideological training and training in the preparation of means of transmitting messages, explosives and weapons. After the training period, she served as a contact and her kiosk served as a place for passing messages between Lehi members, and for hiding weapons. At night she hung posters. Messages were delivered regularly in the cylindrical container of a fountain pen or in matchboxes. She often placed gunpowder and detonators in them as well. Guns, leaflets and underground newspapers were hidden in the bottoms of olive and pickle bins, buckets of water and food packages. Messages were received in the same way. She received the Lehi badge and the State Warriors badge. Upon the declaration of independence, she married Emmanuel Shachmorov and raised four children. She was a member of the Working Mothers Association of the Tel Aviv Municipality. She founded the first PTA in Israel. She was a political activist and in her spare time, she read and wrote poems. Her pride was the establishment of Israel and she would often repeat the phrase “The people of Israel live and endure”. Victoria died on June 5th, 2006 and was laid to rest at Har Hamenuhot cemetery in Jerusalem.