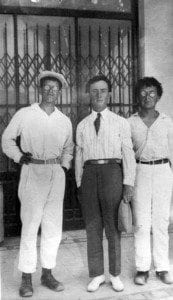 Yair saw the ideological poverty of IZL as the root of its organizational, moral and ethical deterioration, eventually causing the split in time of crisis, leading it to put a halt to the armed struggle against British rule and to cooperate with it. He saw the lack of a stable ideological basis and the lack of faith in the path to be the sources of the confusion and despair of many good people who abandoned the lines.

Therefore, ideological crystallization was seen by Yair and his friends as he first link to prosecuting the war. This was an expression of the big switch occurring as a paramilitary organization became a revolutionary underground, a national Hebrew liberation movement. The main ideological shift would be the need to advance the recognition that the fight was not against an evil government, not the rule of the mandate, not a hostile policy, but rather a foreign ruler, an enemy. Similarly, the war was not about the change of policy but the establishment of the sovereignty of the Hebrew people in its land and the authority over it, its liberation and independence; this would be the main mission of the Hebrew liberation movement.

Yair publicized his word view in a declaration he composed, called 18 Principles of Rebirth, after much consultation and discussion with the command staff and the intellectuals, some of whose influence may be seen in the work: Uri Zvi Greenberg, Dr. Yeivin, Abba Ahimeir, etc. It was first published in the second issue of the internal periodical BaMahteret, in Heshvan 5701 (November 1940). The essence of the 18 Principles of Rebirth was the ideological ABCs of Lehi: establishing a Hebrew state through force, as Yair explained:

As for these two principles — establishing a state and the use of force — we may say that they are in fact the A and B of our ideology. Perhaps these two basic principles had added to them the other principles of rebirth, C, D, et al. They come to add, not to detract. We want to consolidate a way to sovereignty and rulership and for a life of dignity first for the freedom fighters and afterwards for the nation as a whole. These would be the lives of the Hebrews within the Third Temple, when the homeland is conquered as a permanent inheritance. We must be a chosen faction within the chosen people, a faction bearing a holy idea, a faction seeking and fighting for liberation, faces turned to the complete redemption of the people as a whole, in spirit and in flesh. Capturing homeland and restoring the kingdom — these are the first stages. The great Hebrew people must follow the path of dominion and control, to the end of all generations.

These 18 Principles of Rebirth only have positive points: chosen people, homeland, destiny, redemption, restoration of the kingdom, rebirth of the nation, renewal of the dominion, education of the nation, the rule of justice, the resuscitation of the desolate, the unity of the people, the ingathering of the exiles, the revitalization of the Hebrew language, etc. On the other hand, there were negative basic assumptions missing, such as anti-Semitism, which was a concept widely accepted in the Zionist movement. For Yair, the desire for redemption was natural, drawing the concept of independence from Jewish culture throughout the generations, not as a reaction to non-Jewish actions. This is the reason that both the British and the Arabs are absent from the 18 Principles of Rebirth. The term “foreign ruler,” Yair believed, was an essential concept, applicable to any external conqueror on the land: any non-Jew controlling Eretz Israel falls into this category.

After publicizing the Principles, there were many debates among the members about their explication and practical application. However, at the end of the day, they were accepted as the core principles of the Freedom Fighters of Israel movement, the ideological underpinnings of the war to liberate the homeland from foreign rulership.

When the Principles were publicized, Yair also expressed a distinction between an “enemy,” any foreign force ruling the homeland and keeping dominion and freedom from the Hebrew people, and “adversary,” those in the Diaspora who hated Jews. An “adversary” might reach the level of Haman in the Book of Esther, “adversary of all the Jews” who “sought to kill, annihilate and destroy all”—but the battle against the adversary could not be an excuse to push off the war against the “enemy,” occupier of the homeland. There would be no adversaries without the nation being enslaved in the homeland. Were it not for the subjugation, the land could absorb all the Jews so despised by their adversaries. Therefore, one might ally with the adversary when fighting one’s enemy, as the enemy of our enemy is our friend.

After Yair’s murder in 5702, it was Israel Eldad, Natan Yellin-Mor and Yitzhak Shamir, members of the Lehi central committee, who continued the ideological establishment of Lehi and Yair using the periodicals BaMahteret, HaHazit, and HaMaas.

In these essays, Lehi’s battle was expressed as a total shift in the values system then accepted by the Yishuv and the Zionist establishment. This would not be a Zionism, looking for a resolution for the people, but rather a resolution for the land; not philanthropic Zionism for refugees, but the natural yearning of a people for autonomous government in its land.

This meant seeing Britain not as a friend and a partner, but as a foreign ruler, an occupier, an enemy; seeing ties with other powers as independent, sovereign, external relations; seeing faithfulness to British rule and assistance to its security forces as collaboration with the enemy and treason towards the people and the homeland.

As time went on, the three methods of Lehi were clarified. To achieve its goals, there were three main methods:

Aliyah was an essential part of saving the Jews from extermination, returning the people to its land and strengthening the battle lines of the vanguard fighting or preparing to fight in order to achieve the goal.

Settlement was required for productivization of the Hebrew people and the land, but settlement has a purpose: seizing important strategic military and security points.

It was necessary to appear on the international stage in a proud, dignified, independent way, without any dependence on strong patrons. A Hebrew foreign policy must be disconnected from the British aegis, seeking allies and links which identify with the interests of the Jewish people.

This meant warring against the foreign ruler in every way and with every too: an all-out war using rebellion, demonstrations, strikes, nonpayment of taxes, and mainly by force of arms. The war must bring about national leadership to unite the people and direct it on the way to the goal.